You Are Here: Shop Online » News » Is there such a thing as an Emergency Exit?

Why buy from SSP?

1 -I found the product by googling and your company came up. It was the only company that did wha...

Is there such a thing as an Emergency Exit? 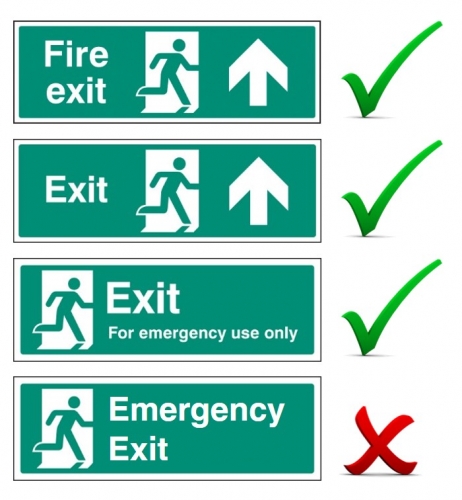 In Great Britain today the sign ‘Emergency exit’ is still widely used to denote the door that is to be used in the event of an emergency. Often this sign is just text only, without a picture of a running (or more accurately a fast walking) man.

However, as of over 15 years ago (Dec 1998), this is no longer acceptable by the British Standards.

When the Health and Safety (Safety Signs and Signals) Regulations first came out in 1996 is specifically stated that the all fire exit signs must show a “fast walking” man. This man could be one of two designs; either the Euro style pictogram (man going towards a door) or the British Standard man seeming stepping through an open doorway.

The Regulations did not specifically state supplementary text of any kind need to be shown on either sign.

The British Standards, through BS5499 part 4, accepted the picture advice but suggested a good optional extra would be wording to help improve comprehension. Moreover, in the early 2000s the British Standard was revised. From this point on, installers that wished to not only comply with the law [H&S (Safety Signs & Signals) Regs] but the British Standard as well had to use signs with supplementary text. The text used had to be one of the following phrases:

Emergency exit does not appear in this list at all!

For advocates of the ‘Emergency exit’ sign, the counter argument put forward is that, with the exception of fire drills, all building evacuations are ‘emergency’ related but not all of them are ‘fire’ related e.g bomb threats, gas leaks etc. However, the Standard is unequivocal. Only the three phrases above can be used.

The definition and difference between an exit and fire exit has long been explored. Signs leading to the front door and any other door used in normal day-to-day working practice should use ‘Exit’ signs. Signs leading to and denoting the door that is only used in the event of an emergency (usually with a push bar or push pad on them) should be marked as ‘Fire exit’. However, the least common of these and slight anomaly is the ‘Exit for emergency use only’ sign.

Common wisdom is that this sign can be used instead of the fire exit sign. However, in practice, research suggests that installers use this sign to denote a secondary door that may be used in the event of an emergency. In other words, the evacuee’s first choice is the doorway or corridor marked ‘Fire exit’. However, if for some reason that exit is blocked, then some installers like the idea of having a secondary means of escape signed should the evacuee require it.

However, as this article reviews, the sign that is certainly not an option for any installer is the ‘Emergency exit’ one. It transpires there is no such thing!